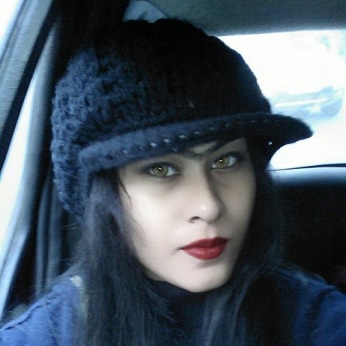 Helooooo my lovely Blogvillers!! What have you guys been upto??

I’m on cloud 9 coz exams have ended 😉

And I’m very thankful to all of you for so many best wishes and encouragement to the ‘Exam Sick’ girl haha. Papers went kind of well. Hopefully I’ll be able to save my Departmental rank.

Do you know how much I love you guys?? More fiercely than this guy 😉

Last day of exam was pretty crazy. The guy sitting in front of me fell asleep in exam hall. It was really funny. You can’t blame him though. We all got only 2-3 hours of sleep in some of those weeks. All of us had blood shot eyes.

So basically in these last 9 days post exam, I’ve been sleeping for 10 hours straight. Woke up at lunch time. As usual lunch was healthy and boring. I begged and begged till mom let me order something from outside.

The next 1 hour was spent in mom telling me how obese and undernourished my kids are gonna be eating ‘bad food’. Somehow mom manages to end each and every conversation on my future kids!!

And then I spent the rest of the day reading blogs. With TV on mute. I read so many wonderful posts. Got to know so many new thoughts. It made me think in new light. I loved looking at the photographs. Sometimes I didn’t understand the language. But its so peaceful to see such beauty in such far away places.

So now lemme tell you about the fun and bling stuffs we did!!

Thursday was the craziest!! Literally ‘3 Girls in the City‘. We graced the city with our gracious presence!! haha :p :p We seriously had fun.

First we went to a video game parlor. My friend fell down on the bowling alley!! Who goes bowling wearing heels and skirt?? Oh god!! lol :p :p

Then we went for 3 back to back movies. And then to this amazing café!!

‘San Andreas’ was my fav in all the 3 movies. Many of you have probably seen it by now. But this movie was cool in a different level to me. Because I’m a huge Rock ‘The People’s Champion’ fan!!

This is definitely one of the best disaster movies I’ve seen. And trust me, I’ve seen a lot of them.

But I really went to watch Rock. I LOVE WWE!! I’ve been a fan since his wrestling days.

I loved watching WWE matches as a kid. I used to cheer like a maniac 😉 . Life has become busy now. But I still try to watch the major matches.

Such grand entries. The music and pomp!! Wow!!

We had a really large soft springy sofa beside the bed. I was like 6 years old at that time and my favorite activity was ‘flying’ really high from sofa to bed and back.
As if someone’s throwing me off the ring or I’m pinning them down…..1……. 2 …….3 …….I win the match!! 😉

When Rock was a regular at the ring, I was too young to actually know which Championship is going on, but I knew all of their names.
Later in 6th grade, I used to download those matches and that’s when I got to know the technical stuffs of the game!!

And Rock has always been my favorite. His verbal skills, the way he referred himself in 3rd person, so swag!! His ring presence was just stupendous and all the matches, just hardcore thrill!! I mean he was the first person ever to win 7 championships.

His matches against Mankind, Triple H, Jerico, Hulk Hogan, Undertaker, Stone Cold Steve Austin and then Cena…….Legend-Wait-For-It-Dary!!
He won against all of them. Rock is like a real life Superhero.

I even wanted to join wrestling classes but mom didn’t let me. Apparently girls don’t look good in muscles. 😉 Mary Kom, if only you had won the bronze in the Olympics and Gold in the Asian Games for Boxing at that time 😉

But inspite of saying all that, my parents have never differentiated between me and any boy. They have given me more love, freedom, responsibility and trust than many boys manage to get.

Besides, as the famous scootie ad line goes….

Why should boys have all the fun?? 😉

I even possessed quite an envious collection of wrestling cards with all their pics. Some I would buy, others I would get free with chips packets 😉

WWE was known as WWF back then. But ever since Vince Mcmahon changed the the F to E in 2002, things got more censored and less violent. Not cool!!

I loved all the adrenaline. The excitement. The mojo. The totally cool moves, punch after punch, pulling at the hair, the flips, blood spilling out, head banging, chairs breaking, wrestlers flying out of the ring, crowd screaming, contenders roaring!! I loved all that.

And it was so funny when the referee would in turn get beaten by the contenders. 😉

Rock and Steve Austin’s rivalry was larger than life. But Rock pinned him in Wrestle Mania XIX. That was Austin’s last match and Rock also took a break after that.

But what an imposing match that was!! It was attitude era. Things were wild. I don’t think they in real life also hated eachother like that. The violence I guess was all professional and only for the grandeur and splendor of the game.

So that is how I have known Dwayne ‘Rock’ Johnson since childhood. My friends in primary school knew as ‘The Scorpion King’ though.

And I loved ‘San Andreas’.

The picture quality was great. One of those movies where the 3D was properly utilized.

Ray is the dauntless rescue guy with expert flying skills and the best track record. And always coming up with ‘cliff-hanging’ (literally) rescue moves to save a person’s life even in the most tricky situations.
I loved the starting!!

Rest of the movie is a series of cinematic walloping moments ranging from helicopters to airplanes, cars and speed boats with Ray racing against time with his estranged wife Emma to save their daughter Blake after a 9.6 earthquake hits California.

The tsunami scene with the huge ship almost falling on them was the best!! 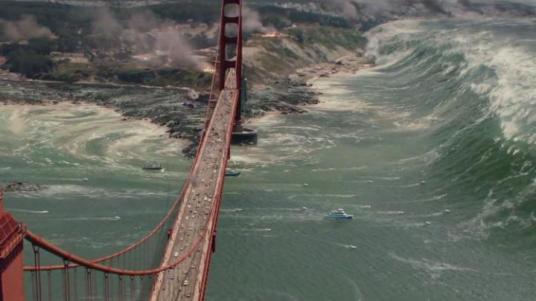 And I don’t think anyone else would have been better suited for the role. Dwayne Johnson’s wresting background plays up well for the shown strength. And its amazing how he manages to give such sensitive and melancholy expressions inspite of possessing such a tough strong appearance.

And Carla Gugino is always gonna be the super spy mom from ‘Spy Kids’ for me.

I loved how the movie brought out such heart swelling emotions amidst such chaos. Family sticks together. In all crisis. That is what the movie was all about.

Generally while watching most movies my friends and I are more interested in watching those lovey dovey couples in front of us. 😉 :p

But seriously this movie was thoroughly entertaining from first to end scenes with really lots of cringe worthy ‘OMG’ moments!!

I was really happy watching so many action sequences after such hectic semester exams.
But I think they should have taken someone else other than Ioan Gruffudd  for the role of Daniel, Emma’s successful unscrupulous selfish boyfriend. He has played the superhero Mr. Fantastic of ‘The Fantastic Four’!! He has been saving people all this while. He already has a ‘good guy’ image set.

Recently a 7.4 earthquake had hit Nepal. The extent of destruction and loss has been humongous. And seeing how within fraction of seconds people lose their lives and buildings ….just disappear, its just scary.

Living away we can never estimate the horror people go through at that moment. Its bloodcurdling!!

So the last word of the movie ‘Rebuild’ was very significant.

And 2 more things I gotta say, firstly its incredible that in every disaster movie the first thing to go down is always the ‘Hollywood’ sign :p

Secondly, can we please like OMG pleasee cut down on the underwear ads during the movies?? They played it so many times that the jingles of every brand is almost ringing in my ears :p :p

So Thursday was a celebration for being ‘half-engineer’. Its a customary at our college. Every batch that passes 2nd year throws up this big bash with lots of fire crackers and music. We have the dept. party coming up next week!! 😀 😉

We went for two more movies. Absolute Bollywood rom-coms!! They were also so good!! It was such a fabulous day.

A friend of ours starts singing the saddest breakup songs whenever we see couples too busy with their love :p :p They look at us embarrassed and we start laughing. Yeah we are evil!! 😉 haha

I’m really gonna be missing this college life. 2 more years and then everyone’s gonna get busy earning money, these careless moments running azure with the wind……I hope we manage time for that. 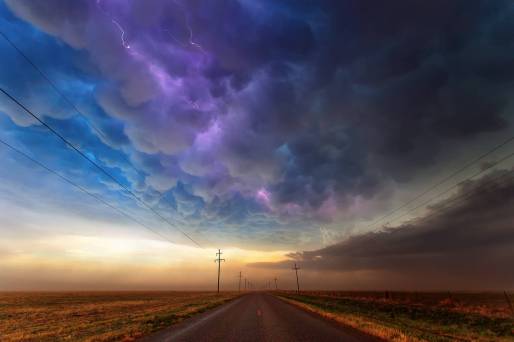 Anyways I’m gonna be watching lots and lots of movies this holiday, some really cool movies are gonna release this month 😉 Holly Bolly bring’em all!! Also gonna read many many books. Atleast that’s the plan. I love exploring new music. And if I really love them, I’ll let you guys know.

And how about you refer me some movies or books for the vacation!! I love action, rom-coms and horror ( Not the Paranormal Activity type but where you actually get to see the ghost).
Books……I love all of them.

Merci Mesdames et Messieurs for going through my blog!!
Excusez-moi if I have made any mistake.
Bonne Journee!!

Alright this is all the French I know. Hopefully after visiting more French blogs I’ll get to know some more words 😉   lol I always wanted to talk in French. I guess ever since I read those Enid Blyton ‘Malory Towers’ books 😉 Love the accent!!

120 thoughts on “The ‘Rocking’ Thursday”